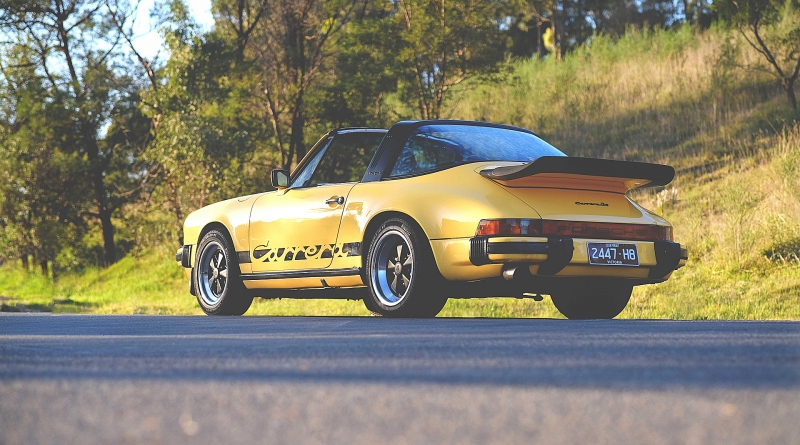 An ice cold soft drink from a glass bottle on a summers afternoon, or a Chico Roll with a first date. That’s what I think of when I get transported back in time to the late seventies when driving this ‘77 Carrera 3litre Targa 911.

It must be the whale tale or the Talbot Yellow colour. Or maybe it’s the period cassette player fixed to Smooth FM. Maybe it’s the Carrera script or the classic Pirelli tyres that have a tread pattern almost 70’s formula one, from an era when moustaches and cigarettes were all over the signage at the local Milk Bar and on billboards at the railway overpass.

There is just something about this Targa that makes me sing along to the radio when driving, like no one is watching or listening, each and every drive. I’ve never had such an experience with any other car. And nothing on the radio is ever past the early 90’s!

The first encounter with this Porsche couldn’t have been in a better setting. I started creating memories with the Happy Targa in a coastal town in Summer. The top was off, the roads were twisty, and the air was sea-side fresh.

Not too far down the road from collecting the car I enjoyed a black coffee and poached eggs. It was an early start. I sat there grinning from ear to ear, looking out to the car, and looking forward to the trek home. It would be a 10 hour first drive. I was excited to get to know the car and to learn its story. It really was a perfect start to the journey of ownership. A pleasant transaction, pleasant location, and a gut feel that this car was going to be fun, and since that day, boy has it been fun.

The trip home was shared physically by no one, just my lonesome, but together with my driving mates over our daily Whatsapp chat. It was pretty much an hourly update of photos and my feedback of the first experiences of what a Carrera 3 litre was really like. Understanding the mystery of that motor and enjoying the Targa top off freshness.

The guys were very much excited for me becoming the new caretaker of the Happy Targa, especially as the day I collected it was a week day, so I’m sure a pleasant distraction for the boys at work was welcomed throughout that day!

It is a capable car. It’s plenty powerful, but it really is a car that puts a smile on your face. It’s just a hoot to look at, to watch drive by and to listen to as it screams past, and yeah it’s just ace to drive.

I never knew anything about the Carrera 3 litre prior to becoming a custodian of this Targa and I never knew what was so special about them, but when I instantly felt the motor rev so freely and when I heard it sing at high rpm I was sold. I have since become a C3.0 ambassador.

I could easily bore you with the performance figures and history that I researched but this car is not about its performance really, it’s about the feeling I get when I’m in it, or even near it, so those numbers are irrelevant to me.

I wouldn’t change a thing to this Targa. The colour, the 7&9 inch width wheels, the 3.2 tail fitted in the early 80’s, the tip-top yet aged original interior, its worn original Carrera script carpet mats, it’s perfect in my eyes. It’s seen plenty of kilometres which means plenty of memories have been had by its previous owners. Comfortable and worn in nicely, this Targa has lived a full journey and I’m excited to be in this chapter.

There is a time in your life where you find what you’ve been looking for. After driving this car, for me it was clear, I was after an experience. In this case it was going back to the simpler times for a few moments. When cars didn’t drive themselves, and when the driver was as mechanically minded as the car itself.

So many words come to mind to describe the feeling I get with this car, but non any better than “summer loving, having a blast…”

A Work of Art